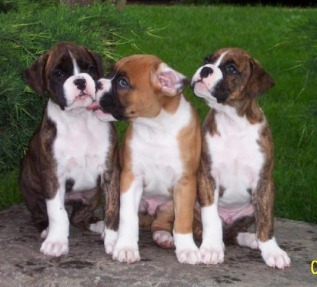 I am including some helpful information on teaching a new puppy basic commands, tips on crate training as well as house training the new puppy. The key in all of these is to be very patient, I know at times its tough to be patient, but only use good reinforcement. Scolding a puppy with only make him afraid. Do not ever use a kennel as a punishment place, or the puppy/dog will not think of his crate as a good thing and every time he is put into his crate he is going to think he has done something wrong. Remember, always be positive!
Training Your Puppy
Basic Commands

1. Get a crate large enough to allow your pup space to turn around, stand up and lie down for a nap.

2. Put a soft blanket in the crate, preferably with his mother's scent on it when you bring him home.

3. Make sure to put his toys for chewing and a treat or two in the space furthest from the `door.'

4. Put the crate in a corner of room where he can feel out of the way, yet have access to you.

5. Let your pup wander in and out of the crate to get a feel for it, the crate makes a nice `den' for your puppy and he will likely take to it for comfort and solace when he is tired, over-excited or worried.

6. Remove your pet's collar/s before closing the crate to avoid any choking.

7. Have a bottle of water with ice hooked to the crate if you will leave your puppy for more than an hour.

8. When it's time to be crated, tell your puppy "Crate" or "Bed" and show him to the crate. You may put a treat in there if you have been training him with treats.

9. Don't ever: scare him into the crate, put him in there as a punishment or otherwise encourage a negative connotation to the crate.

10. Practice this several times a day during his first few weeks home. Leaving him in the crate for short intervals while you leave the house. He will soon realize that you come back and let him out.

11. If your dog needs something to chew, make sure you give him a toy that he cannot shred, break or otherwise harm himself with. If he is an aggressive chewer, I recommend the Nylabone.

12. When you let your puppy out of the crate, immediately take him outside to relieve himself. For very young puppies, this will likely be every 4 hours. (on average a puppy needs a break in as many hours as he is months old  if your puppy is 4 months old, please give him a potty break every four hours).

13. When you are leaving, or putting him in the crate, give him his command, "Crate," praise him gently when he complies (but do not get effusive) you don't want him to get all riled up!) and then leave without a commotion.

14. Upon returning, open the crate and let your puppy come out at his own pace. Don't make a big fuss, simply praise him gently, put on his collar and leash and take him outside.

Crate training is a valuable asset to any training program for new puppies and can help enhance your relationship with your canine pal. A happy and comfortable puppy will mature into a well-mannered and loving companion.
-©Peggie Arvidson-Dailey